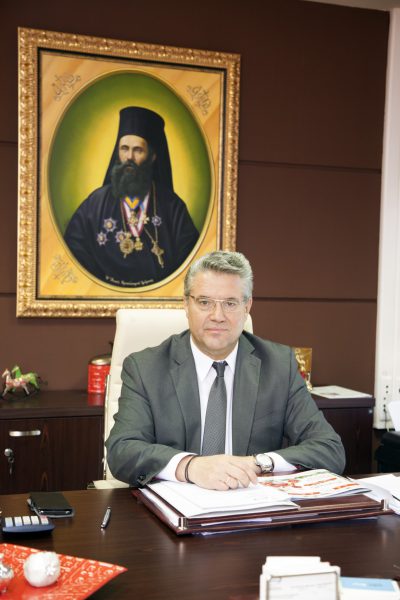 Christodoulos Mamsakos was born in 1964 in Drama, is married to Roubini Kouranou and father of two children, Theodora and Evangelos.

He is a graduate accountant-tax consultant and holds a Master of Business Administration (MBA). He has a long professional experience in companies of any type and legal form on the wider region and a rich educational experience as seminars rapporteur in accounting, taxation and human resources.

In 2014 he was elected Mayor of Municipality of Drama with the municipal faction “Enonoume ti Drama”, which he is leading. He is Chairman of DI.A.A.MA.TH. A.A.E. (Development SA Waste Management Company of Eastern Macedonia – Thrace), Chairman of D.E.P.AN. (Greek Cities Network for Development), Manager of KEDE in Greek-German Assembly, Vice President of Strategic Transboundary Cooperation «Nestos – Mesta» of the Community Initiative INTERREG III for the Euroregion Nestos – Mesta, Member of the Commission for Planning, Infrastructure and Environment of KEDE (2014 – 2019), Member of the City Council of Greek Martyr Cities Network, CEO of the Development of Drama SA – Development SA O.T.A. and President of the Schools’ Boards Committees in the Municipality of Drama.

Η ιστοσελίδα χρησιμοποιεί cookies για την ενημέρωσή σας περί των άρθρων που έχετε ήδη επισκεφτεί. Οι πληροφορίες διαγράφονται μετά από 24 ώρες. Με την παραμονή σας σε αυτήν αποδέχεστε τη χρήση τους. Αποδοχή Όροι Χρήσης
Privacy & Cookies Policy
This website uses cookies to improve your experience while you navigate through the website. Out of these cookies, the cookies that are categorized as necessary are stored on your browser as they are essential for the working of basic functionalities of the website. We also use third-party cookies that help us analyze and understand how you use this website. These cookies will be stored in your browser only with your consent. You also have the option to opt-out of these cookies. But opting out of some of these cookies may have an effect on your browsing experience.
Save & Accept
Cookie notice